R is for Rooster

R is for Rooster 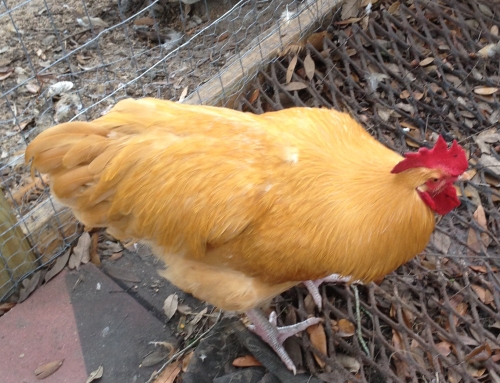 I don’t know too much about photos or stories involving the alphabet but I can say “R is for rooster, C is for chicken and D is for dinner they are all in my story.

A few months back, about five to be exact, I bought four baby chicks and was assured that I had all hens.  I figured that once they started laying four would be enough to supply me and my son who lives near with all the eggs we could use and they would be healthy because I’d know exactly what they were fed.  Thus I named them; Michele, Hillary, Jackie O and Roslyn.  Do the names sound familiar?  Anyway, back to my story.  When they were about 3 months old my husband came in one day and told me I should change Hillary’s name.  I asked “why?”  “She’s crowing” he explained.  So I changed the name to Cock-O-Doodle-Do.  I thought that would be appropriate since our neighbor’s hen had left home and had taken up resident in our yard and we called her “Cluck.”

All went well for another month then the rooster attacked one of our hens and seriously injured her.  I was furious and made him leave the safety of the chicken pen.  The hen healed in about a week.  Cock-A-doodle-Do became great friends with Cluck and they prowled the back yard which is fenced and scratched for bugs and earth worms.  I tolerated the destruction of my flower beds and trust me that is giving a lot since I am a plant nut.  If it grows I’ll take it and find a place somewhere in my yard for it to live.  I wish I could say and we all lived happily every after.

At dusk dark Cluck flies up high to a limb of the huge oak tree where she spends the night safe from any prowling wild animals.  The rooster has not learned that he can fly so I feel sorry for him and worry that something might attack him at night while he sleeps.  So after the girls (my hens) retire inside the hen house I cover the entrance to the breezeway with a board and put Cock-A-Doodle-Do back in the pen.  He would crow early in the morning and I’d go out, rain or shine, and let him out of the pen then remove the board so the girls had a place to wander around and scratch.  Of course I put food and water outside the pen for Cluck and him.

Last week he started following me around the yard like a little puppy when I was outside working.  My husband and friends warned me that I should be careful because roosters can sometimes turn mean but I was not afraid.  Then Monday while I was working something hit me hard in the back, almost knocking me down.  I turned and it was the rooster!  He came at me again and again!  I picked up a piece of two by four and scared him off.  When my husband got home I told him what had happened.  He said the next day he would kill the rooster before he really harmed me or our grandson.

He was up early and we chased that old rooster all around the yard before we finally caught him.  You can figure out the end of the story…chicken and rice for dinner that night.

I hope this story did not offend anyone; that is not my intention but if you do have chickens be very careful around any roosters.

Thank you for stopping by and please come back soon.

9 responses to “R is for Rooster”

capturing memories one moment at a time

Seeking the beauty found in the midst of chaos

Colder by the Lake

A Writer by the Water

Welcome to my little slice of the blogosphere

BY GRACE THROUGH FAITH

The Farmers in the Dell

Every Day is a Gift!

Life is an adventure - from camping in the Arctic to hunting for errant single socks to navigating the world of writing.

An exploration in human being after decades of human doing.

Say It With A Camera

Growing and harvesting a bounty of blessings in my potager.